So I realize it’s been quite some time since I last wrote. Things have been a little busy, and I haven’t had much time to sit down and write. And internet isn’t quite reliable at the moment, so that makes things more difficult as well.

As of a couple weeks ago I’ve been living in an apartment with two other teachers (one is a young woman, the other is a young man) from the school I teach at. Both of them are young, nice and we all get along really well. The girl and I spent the last weekend here in Navia, just kicking around, relaxing and enjoying the last couple days of nice-ish weather. Each day we walked to the beach, which is able a mile from where we live, watched the waves lap up against the sand and the pier. One day the water was calm enough that we sat down at the edge of the pier, feet dangling towards the water, watching schools of fish swim between the rocks below us. Big fish too!

My classes are great. I like the ones that I’ve been able to lead the lesson myself the best. I gave a lesson on the US Revolutionary War earlier this week. I also have given lessons on mathematical powers… which was a little interesting. The classes were for the 1st of ESO (ages 12-13) so I wanted to present the material in a way that would be more fun than the normal, dry mathematical procedures. So the night before I taught my self how to do everything with powers–because oh my has it been a long time since I worked with them myself–and tried to think of a fun teaching exercise for them. Well, it wasn’t actually until I arrived to class that I thought of something: Powers = Superhero Powers!

Okay, let me explain. Powers make the base number more “powerful” right, and superheros are more powerful than the average person. And if you use your imagination you can think of the little number floating on the top–36–like a cape. And as we all know all real superheros have capes. Well… most of them. So, the bigger the number on the cape, the bigger and more powerful the base number becomes. Ha! Perfect. The kids loved it. Now… I’ve got to think up something for square roots… Any ideas? 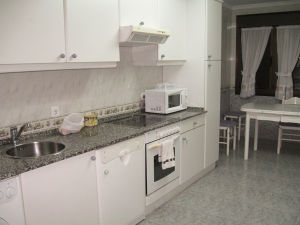 I honestly enjoy teaching the younger kids more. They’re more excited about learning, they’re more open to having fun with the lesson and material. I can act like a complete goof and they love it. So I wave my arms, I act out characters, I pretend to fall to the ground… It’s fun. And they enjoy not having a boring teacher who just lectures. Well, okay, I really don’t do much different with the older kids, but it’s not as fun with them. They think they’re too cool, or something. Now, it is true that I get to teach the fun stuff. And, I don’t have to discipline them, or give them grades.  So I get the best parts of teaching, while the other teacher has to have the more difficult parts.

In Navia there is a wonderful running path right along the river that deltas into the bay and around a beautiful little forest area. And, it takes me right to the beach, which I LOVE. Oh my, I can’t tell you how happy it makes me that I live right by the ocean. I’ve tried to go every day since I moved into my apartment. Now that the weather is getting worse, it’s harder to convince myself to walk/run there. But today and yesterday were the first days in the last week and a half or so that I haven’t been. It’s just so… calming.

On Saturday I ran to the beach, then stopped to stretch, take a breather, and just watch the water. As I sat on sand stretching, an older man in red swim-trunks dropped a small backpack off on the sad and then walked down to the water. He waded in slowly, every so often sweeping up water with his hands and splashing it over his shoulders and back. 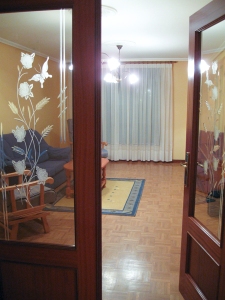 The living-room. Aren't the doors great!? I love them. They work really well as mirrors in the morning, when it's still dark out.

It took him probably about two minutes before he jumped in the water all the way and took a few breast strokes before the wave flattened out and he didn’t have enough water to swim. So he waded out a little further and the started swimming again.

I had just been about to get up and continue on my run when he got into the water. And even though the air was warm, I knew the water was definitely not. I felt as though I couldn’t leave. The Navia beach has a reputation for having a strong current, and with the water as cold as it is… I couldn’t help but think of what might happen to the man if I left. I’m sure it’s his usual. And I’m sure he knows the currents much better than I do. But, I stayed. Just in case. He lasted maybe 5 to 10 minutes. Then he got out, quickly grabbed his bag and walked to the parking lot. Where I hoped he had a nice warm towel and a change of clothes. I got up and continued my run when I was confident the man wasn’t going to return to the water. 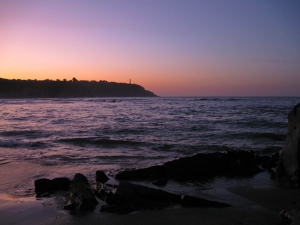 Sunset at the beach in Navia, with the lighthouse in the distance.

So, other than teaching, running and going to the coast I’ve also been enjoying the fact that our apartment has a beautiful kitchen. So far I’ve made paella like rice twice, I’ve made lentils, I’ve made chocolate chip cookies, tonight I made pizza and this weekend I’m planning on making Pumpkin pie. And you know, I’ve made other smaller things throughout. But yes. So wonderful. My roommates are amazed with me. Neither of them are much for cooking. Enough to feed themselves and not have it be disgusting. But they look at me cutting up vegetables, making rice, steeping chorizo in cider, baking cookies and just stare. “How do you do that?” they ask. I just smile. I do it because I love it.

This weekend leads into two days of vacation on Monday and Tuesday. Both of my flatmates are headed home (well, one of them left today), and all my other work compatriots are leaving as well. And well, most of my friends in Oviedo are either heading to their pueblos or off on vacation. So, I’m staying here in Navia. I figure it’ll be a good time to catch up on things, to get to know the area better and… to sleep. Honestly, I think I’ll probably get pretty bored. But, we’ll see. Maybe not. I’ll just have to see how it goes! (I’m hoping for nicer weather…)